As well as reducing N leaching, Captain cool season plantain (CSP) has significantly more growth in this period - the most valuable feed in farm systems.

We’ve called Captain a ‘cool season plantain (CSP)’ due to its extra growth in this period, the most valuable feed in farm systems, with environmental advantages too. Captain also has excellent summer yield and drought tolerance.

Captain CSP yields significantly more through the cool season period as shown in the graph below. Plantains vary hugely in winter growth, as you can see in the photo below. 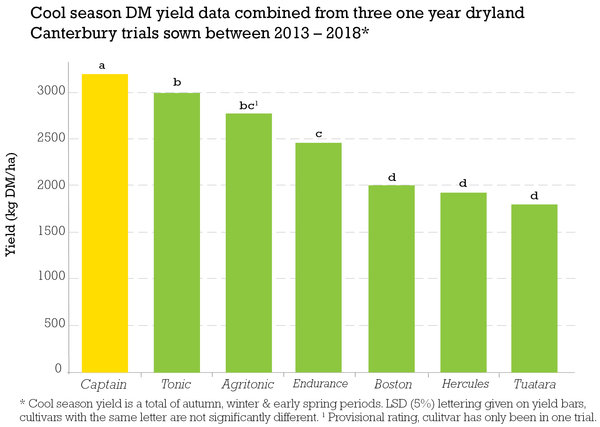 Initial investigations indicate that plantain can mitigate N leaching via a number of mechanisms, including direct activities on soil N mineralisation and direct uptake of N through growth. The greater cool season activity of Captain CSP will enhance both of these mechanisms when it is most needed, as N leaching mainly happens when soils are wet through the late autumn, winter and early spring.

Captain CSP produces strongly across the other seasons too. It's deep roooting, with high summer yield providing additional protein and feed quality over the warmer months, particularly in summer dry areas.

Captain CSP is a distinctive narrow-leaved plant with upright growth habit for high utilisation. It has a deep, coarse root system, and good compatibility with other species. It has good persistence, and can last three years under good management.

Captain CSP can be used as a summer crop, or sown as part of a pasture mix at 2-4 kg /ha to increase summer feed quality in dryland situations. Captain can also be used as part of a specialist high-yielding, quality 2-3 year pasture, with Shogun NEA hybrid ryegrass and Kotuku white clover.