What is a tetraploid?

Ryegrass, red clover, lotus and brassicas occur in nature as diploids, meaning each cell in the plant has 2 sets of chromosomes. Tetraploids have been developed by plant breeders using controlled mutation from a standard cultivar (diploid) to double the number of chromosomes in each plant cell.

This practice was first developed in Holland in the 1960s and has now become common in plant breeding. Tetraploiding does not involve gene modification.

Tetraploids can be identified by their large, dark leaves, and may visually appear superior to diploids. However they tend to have 10-20% less dry matter content. Tetraploid seeds are larger than diploid seeds and because of this a higher sowing rate is required to obtain a similar number of seeds per hectare.

Tetraploid perennial ryegrasses have higher palatability than diploids, as well as greater digestibility and voluntary feed intake by stock. However they are less robust, and don't fit all farm systems.

Tetraploiding annual or Italian ryegrass appears to have little affect on their palatablity. This is probably because they are already very palatable. 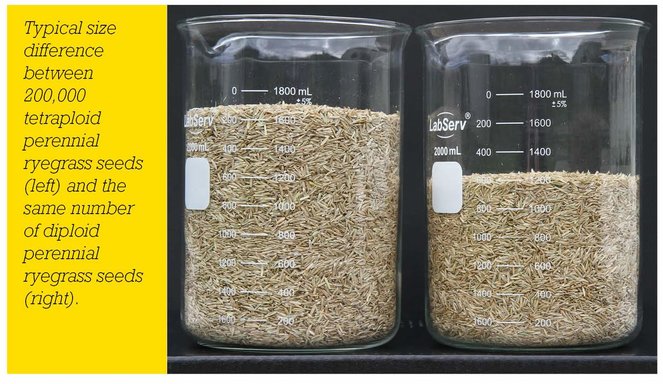