Snow mould is a rare but serious disease, caused by the fungus Monographella nivalis (asexual phase – Microdochium nivale or Fusarium nivale). It can be a problem in establishing autumn sown pasture following cereals. Long, rank pasture swards can also become infected in winter, especially under snow.

Plants begin to die from infection in the crown. Leaves become infected with large, dark lesions that quickly kill the whole blade.

Masses of spores are produced on infected leaves and crowns. The fungus can survive in soil and on debris, especially that of infected cereals, for many months.

Avoid pasture becoming long and rank in winter. Do not drill autumn sown pasture in paddocks where with snow mould is known to have infected cereal crops (producing crown, leaf and head blights). 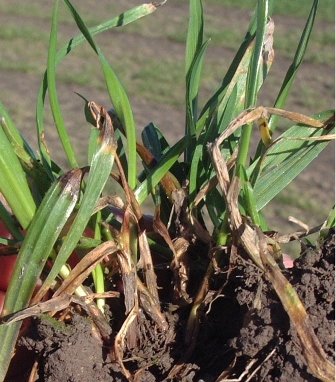