Sooty blotch (SB) is caused by the fungus Cymadothea trifolii. It can appear in early summer, but is most common in late summer and early autumn.

SB causes stunting and partial defoliation. Raised dark green patches appear on the upper surfaces of leaves. On the underside of these patches are black spots which produce numerous dark spores. Infected leaves initially look healthy, but then become dry, discoloured and die.

During summer, spores of SB are spread via wind and water. In spring infection occurs from sexual spores released at the end of winter from fruiting bodies in the trash.

Diseased plants have increased levels of coumestans (flavonoid oestrogens) that can cause reproductive disorders in grazing animals. Timely grazing or cutting can minimise damage from this disease. 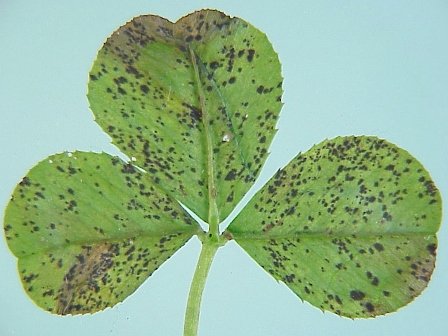 Sooty blotch on the underside of a clover leaf.