Watery soft rot (WSR) is caused by the fungus Sclerotinia trifoliorum. It usually occurs in late autumn and winter, particularly on pure swards. Generally it is not a serious disease.

Sclerotia remain in the soil for several months. Under moist conditions they germinate to produce small, fruiting bodies which eject spores into the air, spreading the infection. These require dead tissue to become established. The growing fungus produces phytotoxic enzymes that rot the host tissue.

Graze at the right time to prevent clover becoming rank and wet. Fungicides are not economic. 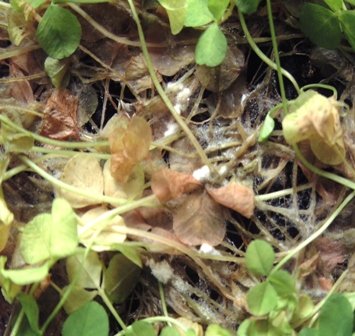