Argentine stem weevil (ASW) is a pest of short-term ryegrass and perennial ryegrass Without endophyte throughout NZ. Adult ASW can damage establishing ryegrass, particularly cultivars with AR37 or Without endophyte. Seed treatment is important to protect new pastures.

ASW larvae destroy ryegrass tillers by boring into the base of their stems. Populations can reach 500-1000 larvae/m², causing significant pasture damage.
To find larvae, look for dead or dying central leaves in tillers, that when lightly pulled come straight out of the plant - due to being eaten at the base of the stem. The base of these stems show a small hole (if larvae are still inside) or significant damage inside as in the photo. 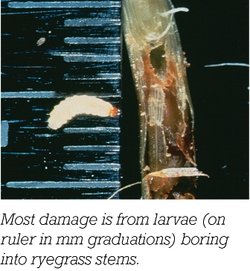 Larval damage mainly occurs from mid October to mid April. It is usually seen when pastures are growing slowly, and is often confused with drought stress. Younger pastures seem to be more susceptible
than older ones.
In most areas, ASW have two generations a year, one in spring and another in summer. Generally the summer generation is the most damaging, between January and March. 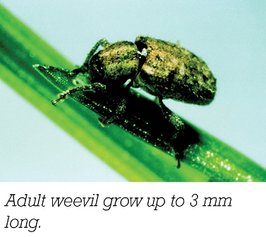 Adult weevil feeding is characterised by small rectangular ‘windows’ 2-3 mm long on the leaf blade (shown in photo). Adults do not affect the persistence of established pasture, but can kill ryegrass at establishment. 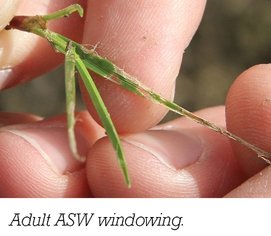 New ryegrass sowings can fail from adult ASW attack in late spring - autumn. This is most likely in grass to grass or cereal to grass sowings with minimal tillage, or when undersowing into existing pasture, as ASW numbers can build-up on the previous grass or cereal. Cultivation can destroy larval populations, however adults may survive.
Adult ASW can kill ryegrass seedlings as they first emerge, predominately in the first few weeks after sowing, however in dry conditions slower establishment mean plants are in a vulnerable stage for longer. 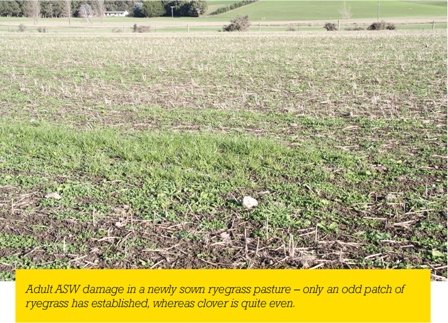 Seed treatment
If sowing new grass where ASW are a potential problem, use of a suitable seed treatment, such as AGRICOTE Grass, is recommended to help protect seedling plants. Additionally, in grass to grass or cereal to grass spray-drill situations where ASW numbers can be high, adding an appropriate insecticide to the final glyphosate spray prior to sowing is recommended, to reduce the ASW population.
Endophyte should not be relied on to provide protection against ASW adult for new ryegrass sowings. AR37 and ryegrass Without endophyte have no protection against adult ASW, and other endophytes (NEA2, AR1 and Standard) give only limited protection.

Tetraploid versus diploids
Once established, a diploid ryegrass containing endophyte (NEA2, AR1 or AR37) will provide good ASW control in most situations once a pasture is established. A parasitoid wasp (Microtonus hyperdae) is now widespread, and helps alleviate damage caused by ASW.
Tetraploid ryegrass cultivars are more susceptible to ASW damage, as they are preferred by ASW, and have a lower tiller density, so they cannot withstand the same level of damage as diploids. In areas of high ASW damage (e.g. Manaia, South Taranaki) Bealey may be less persistent than equivalent diploid cultivars.