Black beetle (BB) is a pest of free draining soils in the upper North Island. Numbers vary widely from year to year, with root feeding larvae capable of causing severe pasture damage in summer.
Adult BB can decimate new grass sowings in autumn, and seed treatment is essential to protect these.

BB are only found in warm areas, including Northland, the Waikato, Bay of Plenty and coastal districts of Auckland, Gisborne and northern Taranaki. As they live on and in the soil, they are mainly found in free draining, sandy, light ash or loam soils, and do not like heavy clays or poorly drained soils.
BB populations vary widely from year to year. They can increase rapidly when conditions are right, and may stay high for several years. Pastures weakened by drought can become colonised by weed grasses such as paspalum, summer grass and poa, which are all good food sources for BB. 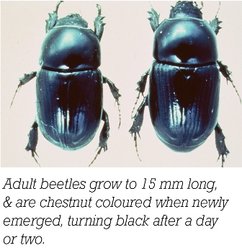 Pasture damage is caused by both BB adult and larvae. Adult BB feed on roots or on the base of plants at soil level during autumn and spring, causing patches of yellowing tillers that easily pull out. Adult BB can decimate new pasture sowing in autumn, especially if spray-drilled or undersown. They chew through the base of emerging ryegrass plants, killing them. 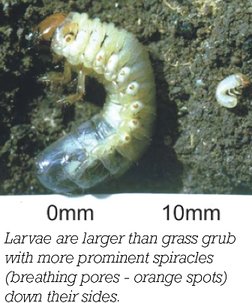 Larvae feed on plant roots during December - March and can cause patchy ryegrass death and plant pulling. Damage is most apparent in dry summers when larval numbers are above 40/m². Larvae can be particularly damaging to newly sown pastures. 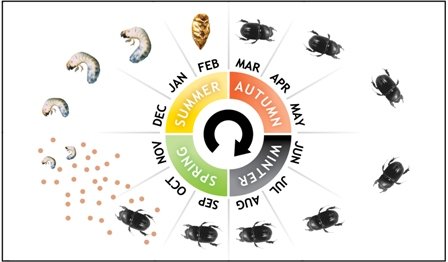 Establishing ryegrass
When renewing pasture in an area with a high risk of BB damage:

Established pasture
Standard endophyte, NEA2, NEA or AR37 all give good control of BB by reducing adult feeding, egg laying, and hence larval damage. They do not directly affect larvae. AR1 endophyte provides little protection and is not recommended where there is a risk of BB.
However, no endophyte gives complete resistance, and all ryegrasses may still be damaged in problem areas in summer dry seasons.
Other grasses, such as paspalum and poa annua, are a good food source for BB adults.
At present no insecticides are able to control BB.