Clover root weevil (CRW) is present throughout the North Island and has been found in most of the South Island. Feeding exclusively on clover, it has a major impact on clover’s production and ability to fix nitrogen. A parasitoid wasp has been released in some areas as a biocontrol agent and has established well except in Northland.

Adult CRW are brownish-grey, up to 5 mm long and have a typical weevil shape. Their damage is characterised by U shaped notches on the edges of clover leaves. As clover is adapted to defoliation, the adult weevil will rarely kill clover, apart from young seedlings. 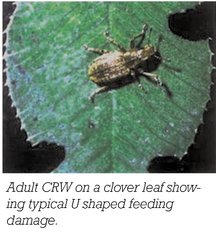 The adults can fly and will actively disperse in drought conditions and when numbers are high and clover levels are low. They are present throughout the year, but are most abundant in spring and autumn.
The larval stage is the most damaging, feeding on the clover roots, stolons and nodules. Larvae live in the root zone, mostly in the top 5 cm of soil. They appear as white legless grubs from 1-6 mm long, with a conspicuous brown head capsule.
CRW is only associated with clovers, so in situations where clover is absent, there will be no weevil. 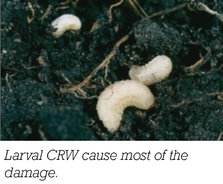 Maintaining the strength of clover in the sward is the single most important factor for reducing the affect of CRW. Don’t let pastures get rank as shading reduces clover growth and therefore its ability to withstand attack. Avoid pugging of pastures over winter, as this reduces clover growth, and avoid over-grazing in summer and exposing stolons to UV damage.
Where clover is severely damaged, or suffering long term infestation, increased use of nitrogen fertilisers may be required to compensate for reduced clover nitrogen fixation.
If sowing clover into a known CRW infested paddock it is likely that adult weevils will require control with insecticide prior to sowing.
Sow newer white clover cultivars which have a higher stolon density and better CRW tolerance (e.g. Weka or Apex), or red clover which is not affected by CRW.

A parasitoid wasp (Microctonus aethiopoides) has been released as a biocontrol agent and is now well established throughout most of the North Island and upper South Island, as well as parts of Canterbury and Southland. This wasp, while not eliminating CRW reduces populations and larval damage.