Grass grubs (GG) are found throughout NZ. The larvae graze the roots of grass and clover causing poor growth and plant death, mainly from March-July. With severe damage, turf can be rolled back like carpet.

GG damage is seen in mid to late autumn, typically as patchy areas of dead plants, often pulled out by stock. These damaged areas can expand outward from year to year. 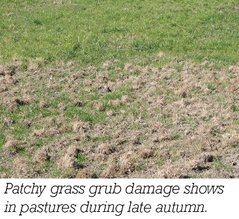 The damage is caused by GG larvae which hatch from eggs in October - December and develop through three instars (or stages). The small first and second instar feed on roots and soil organic matter, doing little damage. By autumn they have developed into the larger and most damaging third instar, feeding 1-3 cm below the ground on plant roots. GG larvae prefer white clover but eat most other species too.
Populations typically grow over a three to five year cycle followed by a population crash due to disease build up in the soil. Within a single paddock however infestations can be at any stage in the cycle.
GG larvae are best found by digging. They are translucent grubs, 25 mm long, with six legs and honey brown head. Usually curled in a 'C' shape, they become active only when disturbed. 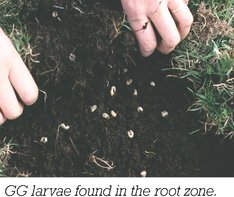 Threshold levels for economic control of grass grub have been estimated (see table). 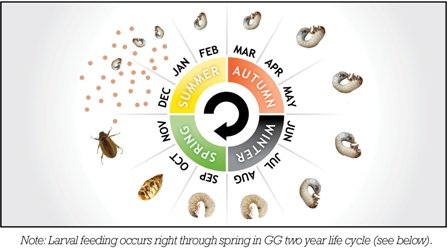 One and two year life cycle
The GG life cycle typically takes one year, but in cooler regions a proportion of grubs takes two years to develop.
One year GG pupate in spring, emerging as adult beetles which fly in October - December, starting the larval stage again.
In dry or cool areas GG larvae grow more slowly and can take two years to become adults. In these areas larvae cease to feed over their first winter, and resume feeding on pasture through spring, rather than pupating. They can cause spring pasture damage. 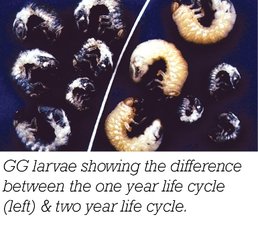 Sowing new pasture
If establishing a new pasture into a paddock with GG problems, use of an insecticide or an appropiate seed treatment such as AGRICOTE Grass is recommended.
Note GG primarily feed in the autumn, but control may be required for spring sowings in areas where GG have a two-year cycle.
Cultivation usually drastically reduces GG larval numbers, but also disrupts natural diseases allowing a rapid resurgence of the population over the next two to three years. Direct drilling techniques are often used in GG prone areas to maintain more stable diseased populations and damage levels.
Established pasture
Control of GG with insecticide has had mixed results, as soil dwelling insects are relatively difficult to kill. Best success is through early applications of chemical in February-March, when GG are smaller.
Mob stocking and heavy rolling when soil is damp can reduce GG populations, but effects are variable.
Bioshield Grass Grub® a bio-pesticide produced by Ballance, is also available for GG control.