Pasture mealy bug (PMB) can be a serious pasture pest in Canterbury areas, and is known to occur in Manawatu and Nelson.
PMB is a small insect found in the crown and on the upper roots of a range of pasture grasses, where it sucks the sap from the ryegrass. Unlike many other pasture pests, it was originally identified on native tussock grass and is endemic to New Zealand.
Adult mealybugs are pink, egg shaped , have no easily discernible head or legs and grow up to 5 mm in size. The crawlers (the smallest immature stage) are less than 1 mm long, and have a pink tinge to them. 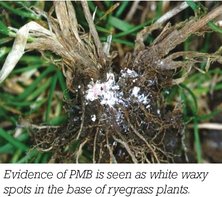 The best way to identify PMB is to dig up ryegrass plants in autumn, and pull them apart to look for white, waxy secretions in the plant crown and upper roots. These will appear as cotton wool-like globules. Outbreaks of PMB are common in pastures without endophyte in Canterbury. Damage was initially mis-identified as drought because affected paddocks resemble a browned off pasture. Symptoms of PMB may first become apparent in January, if it coincides with a dry spell. PMB damage is most noticeable in autumn and early winter where pastures remain browned off.
PMB damage tends to affect a whole paddock, rather than isolated patches. It causes widespread ryegrass death, leading to poor pasture persistence. 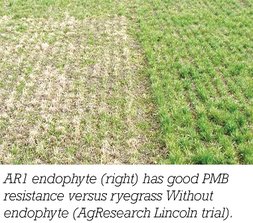