Plantain moth (PM) caterpillars have emerged as a significant pest of plantain primarily in the North Island.

With increasing use of plantain in crops and pasture mixes PM populations are on occasion causing severe damage to plants, particularly in pure plantain crops.

PM consists of least 2 moth native moth species, known previously as ‘carpet moths’. Both are relatively small. E. rosearia are slightly larger than S. rubraria which have a wing length of 9-10 mm. PM are light brown with dark spots and a distinct dark brown band towards the end on the wings. This band is more obvious on E. rosearia while S. rubriaria has a more spotted pattern. S. rubraria caterpillars are brown but vary in tone and pattern. E. rosearia caterpillars are green or brown; both grow to <20 mm long. 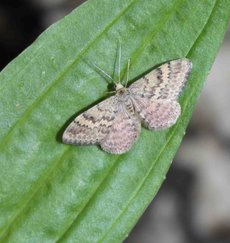 Damage is more likely when a mild winter is followed by dry summer conditions. A short generation time (7 weeks) allows for exponential population growth. PM are most abundant in late summer and largely disappear from crops in autumn. 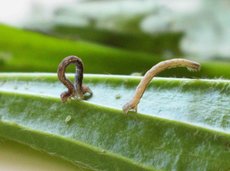 The caterpillars feed on the leaves creating holes or leaf marginal notches which can combine and in severe cases leave only leaf veins. Severe damage (90% destroyed) has been reported. Damage can be highly localised. Plantain moth damage can be

Currently no insecticides are registered for control of PM caterpillars. Broad spectrum insecticide, active against caterpillars, applied early in the season is possibly the best current control method.