Porina are found throughout NZ and attack most pasture species including ryegrass and white clover. AR37 endophyte gives a level of protection.

Porina caterpillars damage pasture in late autumn and throughout winter as growth slows. Caterpillars are greyish yellow with a dark brown head, and grow up to 6 cm in length. They live in tunnels in the soil, emerging at night to feed on the surface, grazing grass and clover. 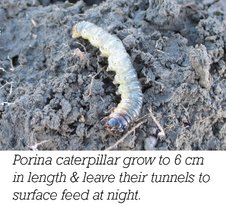 Their tunnels are associated with bare patches of pasture, and dead plants. Tunnel entrances can be found as holes, covered in soil castings and debris held together with silken threads.
To assess numbers dig to depth of 30 cm. Caterpillar populations of 2/spade square (50/m²) in March can reduce pasture production by 1500 kg DM/ha. Caterpillars range from 4-30 mm in length, with a high proportion of small caterpillars suggesting damage will increase.
Adult moths fly mainly in October-January, and do not feed. They are brown with white and black markings on the forewing. A female will scatter up to 3000 eggs, which hatch over the following two to three weeks. 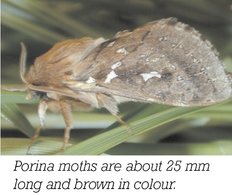 To prevent porina damage, maintain low pasture cover during late spring to reduce survival of eggs and young larvae. Paddocks left for hay or silage, or poorly grazed and rank, are typically worst affected by porina.
Porina can be relatively easily controlled by insecticides. Insect growth regulators should be applied late January-early March. Organo-phosphate and synthetic pyrethroids can be used later, in which case digging in April will give a good assessment of numbers. If possible apply insecticide to a short pasture.
AR37 is the only endophyte to give ryegrass pastures a level of porina control. Anecdotal evidence from farmers suggests AR37 pastures will still need to be monitored and sprayed. Note: AR37 pastures will need to be sprayed less often than others.
Mob stocking in summer can give porina control. Intensively graze pasture to 2-3 cm using high stocking rates (1000 ewes/ha) over a few days.