When identifying TGG, be careful to distinguish them from native grass grub.
Adult beetles are attracted to dung, laying their eggs in or near it. Due to this, initial infestations are typically observed around stock camp areas.
Eggs are laid from January-March and hatch into larvae which feed on dung for four to six weeks before moving onto pasture. From about April onwards the grubs live in their tunnels, feeding through to August, but feeding may go on as late as November. New pastures are particularly vulnerable to damage.
TGG larvae are best identified by digging, and are 15 mm long whitish grubs, with six legs and a black head. (This helps distinguish them from native grass grub larvae, which have a brown head, and are generally larger in size.) When disturbed, TGG larvae start crawling like caterpillars, unlike native grass grub larvae which typically assume a protective ‘C’ shape.
In autumn the larvae live 10-15 cm below ground in vertical tunnels, from which they emerge at night to graze surrounding vegetation.
Populations above two grubs per spade square (50/m²) will cause significant pasture loss and are economic to control. 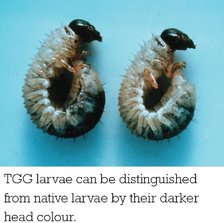 Insecticides are effective in controlling TGG. Populations will often be localised, making spot control with insecticide successful.
Perennial pasture species are typically more tolerant of TGG, because they have a preference for annual grasses. Maintaining good dense