Picking the best mix of pastures for red meat farms can be easier said than done, because so many variables and goals have to be factored into the decision.

But now there’s a better way to improve the odds of getting a perfect fit. And with autumn sowing just around the corner, there’s no better time to make the most of it.

Between them, Tyson, Governor and Rohan literally cover the field, from early feed for ewes and cows with lambs and calves at foot, to persistent, easy-care grazing on the hills.

Each has significant and contrasting advantages for today’s highly tuned red meat systems, and as a range, can be used to enhance animal production and farm profitability throughout the year, across multiple seasons, stock classes and land contour.

Tyson is arguably the most exciting perennial ryegrass the sector has seen, tailor-made for improved income and efficiency in red meat systems.

The key time for feed shortages is August and September, when lactating ewes and cows need all the high quality grass they can eat to milk well and keep lambs and calves growing fast.

This is when Tyson produces 35% more DM than average, which has huge advantages, as it sets up more lambs for weaning straight onto the truck.

Lambs finished off mum never suffer a growth check, don’t need to be drenched or dipped, and free up feed for other stock. Plus their dressing out percentage is higher off mum, and typically they’re worth more on the early export schedule.

Fine leaved and densely tillered, Tyson suits both set stocking and rotational grazing, and was carefully selected for low aftermath heading. It’s now available with NEA4 endophyte, so it can be widely adopted throughout NZ.

Rohan is unique in its ability to cover the ground. It creates a thick, robust pasture that can compete aggressively with weeds, stand up to harder grazing pressure and recover better from extended dry periods or other adverse weather events.

Rohan is for the hill country, where you want good ground cover, and want ryegrass, with limited reversion to browntop and poorer grass species. To do this you need a tough grass that will fight to keep others out.

It’s easy care and tastes good too – stock preferentially graze it ahead of other varieties, making it ideal for grazing ewes after weaning, for example. Its easy grazing nature also helps maximise clover content through good grazing residuals.

A continual comment from farmers with Rohan is that it 'always looks good' because it stays greener and leafier. In on farm trials it has shown a 0.7 higher ME than some other cultivars in November and December.

Rohan is about as tough as we can make a perennial ryegrass, and comes with NEA2 endophyte for good insect control.

Last but definitely not least is Governor the universal all-rounder, a fine, dense, reliable pasture bred for persistence, palatability and high DM yield on the shoulders of the season.

Whether it’s finishing lambs, flushing ewes, or growing out young cattle, this ryegrass is quickly finding favour on parts of the farm which suit a more traditional pasture option.

A key feature is Governor’s ability to grow more DM on the shoulders of the season, in early spring and autumn, when it is most needed.

We’ve been providing Governor for five years now, and the universal feedback is that it is  persisting and performing well. Sales have been steadily growing as has its tough, all-round reputation.

It’s available with AR37 endophyte, as well as AR1 endophyte in situations where AR37 is not required. 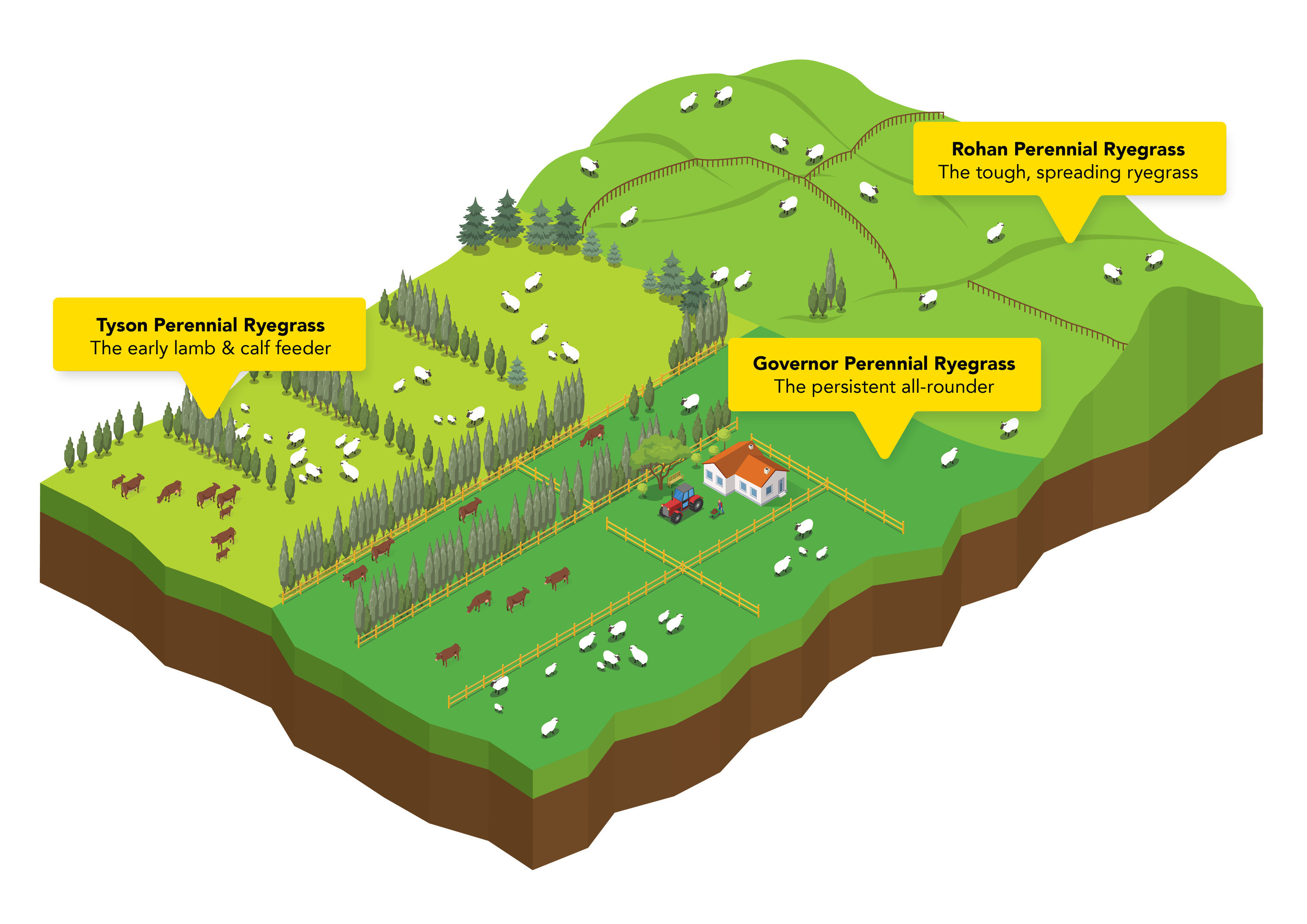