White clover (Trifolium repens) is the base legume of New Zealand pastoral systems.

It is persistent and tolerant of a wide range of management systems and different environments, has a high nutritional value and is preferentially grazed by livestock, increasing animal performance. Its ability to fix atmospheric nitrogen (N) makes a substantial contribution to the growth of companion grasses.

Good grazing management, (i.e. grazing at the right time and maintaining consistent grazing residuals) allows good light into the base of pastures to promote white clover growth. This is particularly important in mid-late spring, as white clover has little winter growth, is slower to start growing in the spring than ryegrass and so is susceptible to shading in this period.

White clover grows well with grasses, as shown in the trial results below where Alto perennial ryegrass was sown both with and without the white clover cultivar Weka. The presence of Weka increased total DM yield to 9.2 t DM/ha over a yield of just 5 t DM/ha without clover. The extra 4.2 t DM/ha grown comes not only from the clover growth, but also from better ryegrass growth due to the additional N from clover fixation. Feed quality is also improved.

Pasture DM yield with versus without Weka clover 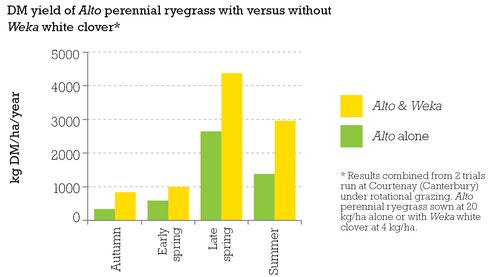 In white clover, there is a relationship between leaf size and stolon growing point density. A larger leaf size generally means higher potential DM yield. However a high stolon density means better tolerance of adverse conditions, such as drought, pests or pugging, and so this tends to improve clover persistence. Older cultivars such as Huia (released in 1957) have a poor stolon density compared to modern cultivars of a similar leaf size (e.g. Apex).

It’s important to select the right clover for the situation based on these attributes. Larger leaved types are more suited to cattle grazing, whereas medium to small types better suit sheep. Typically two different leaf size cultivars are mixed together.